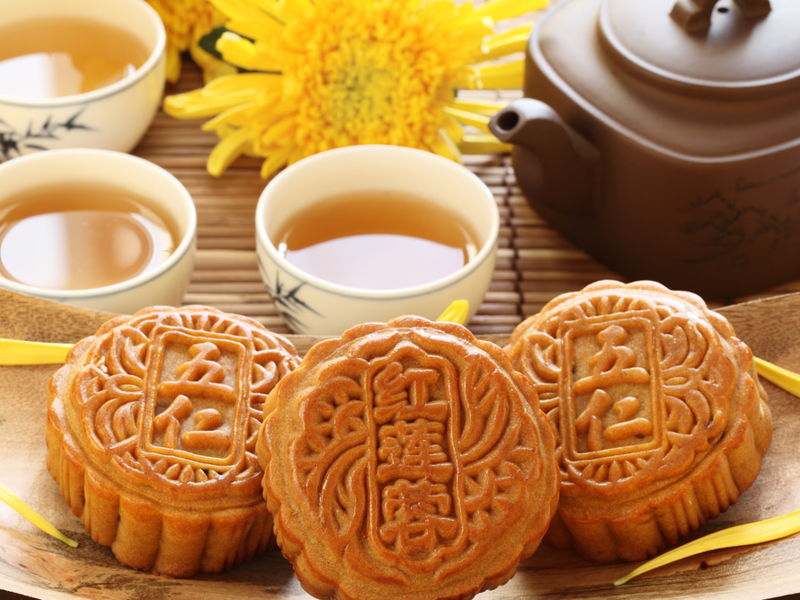 If you're looking for another good excuse to enjoy Chinese food on a Monday, look no further! On September the 15th we'll be celebrating the Moon Festival, a special day in the Chinese calendar that recognises the end of the autumn harvesting season and the date when the moon is at its roundest and fullest. It's associated with the mythological tale of Chang'e, a goddess who floated up to the moon after accidentally taking an immortality pill.

On this day, Chinese families get together to enjoy a meal under the light of the full moon and light lanterns or sparklers. It's a festival that Jez remembers very fondly, as he used to travel up to his grandad's bakery in Manchester every year. There he would be met by row upon row of mooncakes, the traditional festival treat.

For the uninitiated, mooncakes are essentially small pies with a thick lotus seed paste and salted duck egg filling. The pastry is typically imprinted with a Chinese character representing 'harmony' or 'long life', with the egg yolks symbolising the moon. The mooncake story is one of legend. One folk tale says that the Chinese baked secret messages into the cakes to plan a rebel attack when China was under Mongolian rule.

Today, mooncakes play an important role in the Moon Festival. Cakes can be stuffed with everything from coffee, chocolate and nuts to green tea and ice cream or vegetables and hams. Even the pastry isn't essential - we've spotted pink jelly mooncakes with a red-bean paste filling. Some reports have even suggested that controversial shark fin stuffed cakes are becoming 'mainstream'.

In recent years, the demand for mooncakes has really escalated and prices have rocketed. A box of the baked goods is usually $5-10, but mooncakes stuffed with rare or expensive delicacies can cost up to 10 times more. Some even fear there might be a 'mooncake bubble'.

If you fancy turning your hand to some mooncakes, you'll need a lot of patience... But we've found a brilliant video by Wok with Nan with step by step instructions- give it a go, and don't forget to let us know how you get on!