YouTube
HomeTips & RecipesSay CHEESE! We talk to The Fine Cheese Co. about unrequited love, nightmares, and a LOT of fromage.
Learn . Laugh . Eat 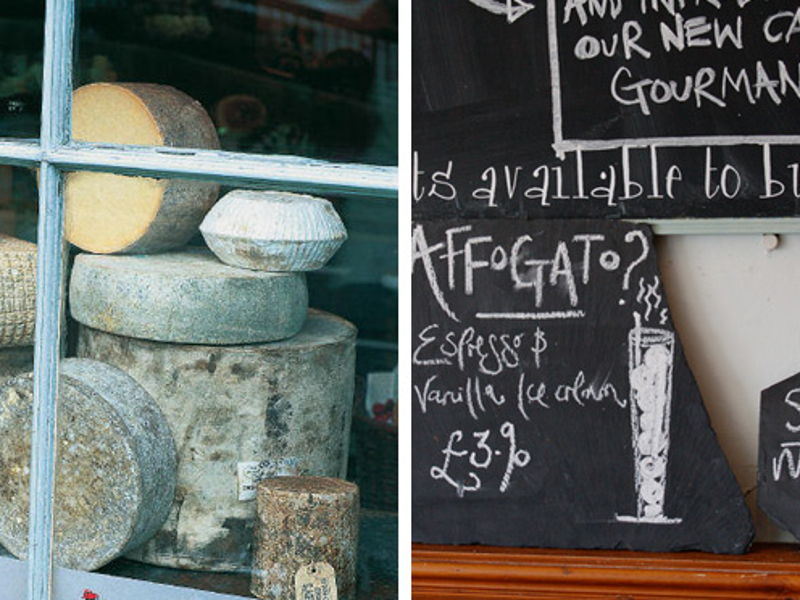 We catch The Fine Cheese Co. chief shop manager Barney Hatch on an unusually quiet day. The sun is shining and cheese seems to be the last thing on anyone's mind (‘I think everyone's gone down the pub', he muses). But it's a temporary moment of calm. The artisan cheese shop located on Bath's Walcot Street, described as "So good it brings a tear to the eye" by Times food journalist Giles Coren, well deserves its reputation as a bit of a cheese mecca for fans of fromage and is usually buzzing with visitors.

"We only sell artisan cheeses that are made to the best of the cheese maker's ability without using any processing" explains Barney. "Artisans aren't concerned whether their cheese will have a shorter shelf life, or that they can't make as many to a certain order, they just want to make the best cheese - something that is from start to finish a quality product. And that is what we want to sell."

Founded more than 20 years ago by World Cheese Awards judge Ann-Marie Dyas, the company still maintains a traditional approach to its cheese selection. It imports the finest cheeses from France, Italy, Spain and Holland (‘Sometimes the only way to get the Dutch to part with their finest aged Gouda is to go over and get it,' explains their website) but also stocks more than 100 hand-made British cheeses and prides itself on maintaining individual relationships with each of its cheese makers. This includes visiting the farms, seeing the animals and giving feedback from customers. "We won't really take anything if we haven't met the owners and the people that have made it," Barney adds.

As well as being able to focus exclusively on quality and taste, working so closely with individual makers also allows the company to incorporate more unusual cheeses into its offering. Take The King's Favourite, for example - an unpasteurised cheese washed in cider made from the Crimson King apple. And then there's Golden Cross, a goats' milk cheese rolled in ash before being left to mature. "There are people that want to break the mould and break tradition to be a rogue, rebellion cheese maker," says Barney. "And we support them as well."

The end result is that you feel like you're getting so much more than just a slab of taste-bud tantalising cheese. In fact, by giving feedback, you can ultimately play a role in the evolution of your favourite cheeses. It also means you're never too far away from an anecdote. Barney cites the story of Pete Humphries as an example, a cheese maker named his creation Rachel after a girl he wanted to impress. Did it work?! "It's a stinky, smelly cheese," laughs Barney. "No, it didn't work!"

This is the brilliant thing about the Fine Cheese Company - it makes cheese feel exciting and almost mischievous (which isn't something you regularly feel after browsing the shelves at Tesco's for a chunk of cheddar). Not only do these guys know their cheese, they've got a sense of humour to back it up. Thus one of the newest - and cheekiest - additions to the Fine Cheese Company's Royal Box of cheeses is the Kate Middleton inspired ‘Katherine', described on the website as ‘modern, mellow, a little firm, but a wonderful addition.' Would Kate be as impressed as Rachel, we wonder...?

With a great attention to detail, and a strong ethos of quality without compromise, The Fine Cheese Company is an independent shop that more than holds its own against the supermarket big boys. With an adjoining café and a delicious selection of breads and wines also for sale, you can't help but feel like a grown-up kid in a (cheese-tastic) candy store. But where to start?

We asked Barney to tell us about three of his favourite cheeses and their ideal wine accompaniments:

Finally, just a word of warning. Cheese before bedtime DOES incur nightmares. Just ask Barney about that trip to Catalonia and the Spanish mountain goat's cheese...

The Fine Cheese Company is one of the independent food shops we visit as part of Cookery Coach's Flavours of Bath tour.