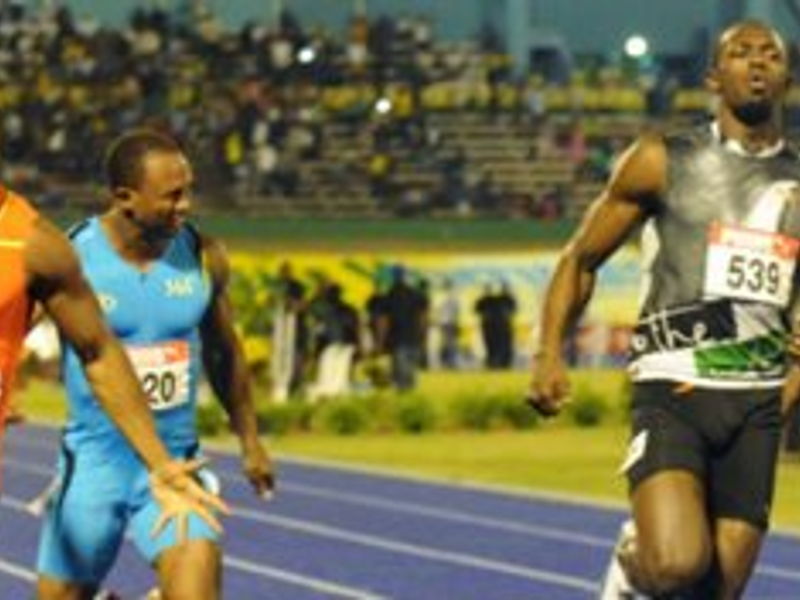 An Olympian's diet of 6,000 calories a day may sound like a dream for most of us, but to make sure you maintain a healthy and nutritious diet all year round just to replace burned calories sounds like a bit of a pain if you ask me - lean meats, wholegrains, low-fat dairy and lots of pasta plans for a pretty dull eating plan if you're having six meals a day.

Nevertheless, I'm sure that we'll be feeling pretty guilty about every meal we eat over the next three weeks, slouched on our sofas with a glass of wine every evening as we recap on what these fine specimens have been up to each day!

More than 15,000 athletes in the Athletes Village will be eating 60,000 meals every day between them over the Games and are estimated to go through 25,000 loaves of bread, 232 tonnes of potatoes, 75,000 litres of milk and over 330 tonnes of fruit and vegetables, including some 2.7 million bananas. Yohan Blake, the Jamaican 100 metre- and 200 metre-sprinter, will probably be responsible for some of those bananas, after admitting eating a whopping 16 a day when training! While that probably seems excessive, he must be doing something right; after all he beat teammate Usain Bolt an impressive two times this year. Bolt, meanwhile, says he survives on a strict diet of McNuggets and yams...you can't really argue with the results seeing as though he's a world-record holder.

While athletes will have a fine choice of cuisines from all over the world in their huge canteen, Bolt will probably be tempted away by the giant McDonalds that's been built on the Olympic Park, the biggest one in the world!

Another athlete whose obscure diet has made the headlines is American swimmer Michael Phelps: according to rumours, his notorious 4,000-calorie breakfast in preparation for the Beijing Olympics included an eye-watering three fried-egg sandwiches, chocolate-chip pancakes, French toast, a five-egg omelette and a bowl of grits!

British beauty and Olympic heptathlete Jessica Ennis eats a more sensible energy-boosting breakfast (that's easier to stomach!): a bowl of bran flakes, a flapjack, a piece of fruit and a glass of orange juice. Home-favourite diver Tom Daley meanwhile says he eats a simple meal of beans on toast to start the day, full of carbohydrates, fibre, protein and a good source of slow-release energy.

for the Chinese athletes' diets, they have been advised to steer clear of pork, lamb and beef when on the road to reduce the risk of ‘accidental doping', as some meats are thought to be tainted by clenbuterol, a performance-enhancing drug. While this may be a sensible plan, banning a Chinaman from eating pork is a risky move in my opinion and will likely lead to some bad moods at training camp! Take our head chef Jez for example, you wouldn't want to cross him before he's had his daily intake of crispy belly pork!

We here at School of Wok will be all watching the Olympics closely, cheering on our GB athletes along the way. We've done our research and come up with an Oriental six-meal-a-day eating plan for athletes that looks to spice up an otherwise pretty dull diet, packed full of tasty proteins and slow-release carbs. Eating six meals a day helps athletes stay full of energy and maintain their low levels of body fat, by speeding up their metabolism, making sure their bodies are burning energy around the clock. If you want to eat like an Olympic athlete, follow our plan...but be warned, you will have to train like one too!

Breakfast Brown rice congee (rice porridge) with honey, sultanas and roasted flaked almonds. Cup of Chinese green tea. Nutrition: Brown rice has more protein and fibre than processed white rice and is a better source of slow-release energy (also contains more minerals too, such as magnesium, phosphorus, potassium and zinc); sultanas are full of anti-oxidants and boron for better bone health; almonds are high in protein; green tea is proven to increase metabolism and fat burning. Mid-morning snack Bowl of steamed tofu with sesame shiitake mushrooms. Nutrition: Tofu is extremely high in protein and low in fat (also contains a lot of iron, calcium and magnesium); sesame oil is a good source of linoleic acid, an essential fatty acid, and is high in minerals and anti-oxidants; shitake mushrooms are rich in iron (to improve circulation) and fibre and help strengthen the immune system]

Lunch Japanese soba noodle salad with stir-fried garlic beef and spinach. Nutrition: Soba noodles are made from buckwheat flour, a high-fibre, high-protein alternative to normal flour; garlic is high in anti-oxidants; beef is packed full of protein; while spinach is high in fibre, vitamin K for bone health, anti-oxidants and has anti-inflammatory properties.

Dinner Hainanese chicken with steamed pak choi and brown rice Nutrition: Poaching chicken is an extremely healthy way of cooking chicken and this dish contains lots of ginger, great for soothing tight, sore muscles due to its anti-inflammatory properties; pak choi is high in anti-oxidants and contains a lot of vitamin K for bone health; brown rice has more protein and fibre than processed white rice and is a better source of slow-release energy (also contains more minerals too, such as magnesium, phosphorus, potassium and zinc).

Pre-bed snack Coconut cream and mango tofu whip with honey Nutrition: Coconut is packed full of lauric acid which is proven to increase metabolism; mangoes are rich in fibre, vitamins and anti-oxidants; tofu is extremely high in protein and low in fat (also contains a lot of iron, calcium and magnesium). So there's the food, we'll leave the training up to the athletes...COME ON GB!!!!!