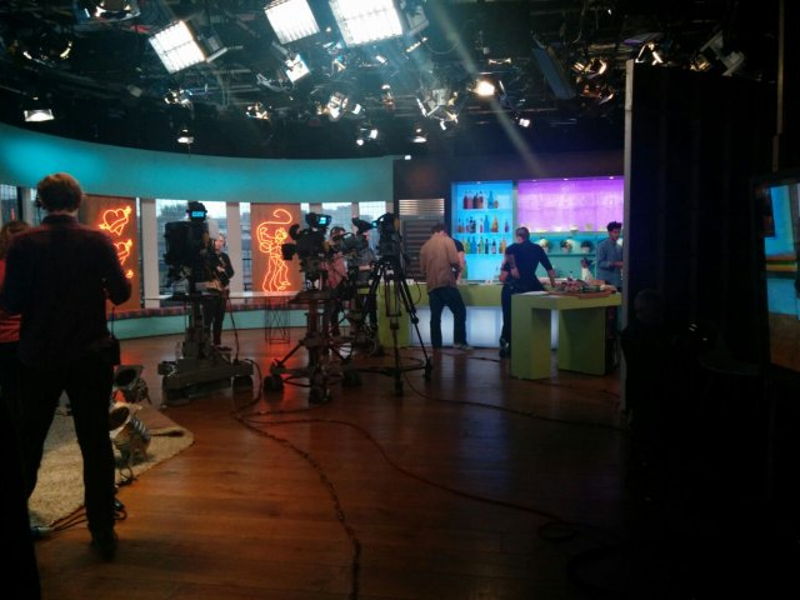 Jeremy Pang has spent many years working incredibly hard behind the scenes in his own kitchens, putting blood sweat and tears (well, hopefully not too many tears) into his own School of Wok. Recently however, Jeremy's face has become a regular part of our tv watching experience, as his recent appearances on Channel 4's Sunday Brunch, and Food Network UK's The Big Eat are coaxing us off the sofa and into the kitchen to test out our wok skills. As Jeremy makes his way onto the nation's stage we sat down with him to see what he thinks about this whole process.

SOW: What's it like to see yourself on tv? Do you watch each time a Big Eat episode is aired?

JP: Like most people I find my voice very strange to listen to on film, but aside from that it was a little surreal the first few times I was on screen. However, as more opportunities have come about I feel a lot more comfortable; it's just a great and exciting part of my job now! I do try to watch each of my episodes at least once though. Given my Chinese background I can't help but always have my parents in my head saying ' there is always room for improvement". So if I ever see something that I would change or do or say differently next time I make a quick mental note of it and try to change it next time I am presented with the opportunity.

SOW: Has anyone recognised you on the streets yet? What did they say? What was your response?

JP: Hah! Yes weirdly. I always think that I'm just a chef doing my thing, but I was stopped on the way to Chinatown with Stefan once and the guy was very excited that he'd seen ' that guy from Sunday brunch' ! He said something along the lines of, "You're that guy from Sunday Brunch! F#$@in' legend!"

SOW: How to you keep your cool with the cameras so close?

JP: Pretend they are students! It's not that different to teaching a class of 12 people or demonstrating at a good festival really. I tend to keep my eye on either the camera or the host or guest etc. Basically, by facing someone or something and focusing on maintaining eye contact, I'm able to keep myself calm. Then it really is just like having a normal conversation.

SOW: How many takes did you have to do for your recent Food Network appearance? Is this more or less than other appearances you've done?

JP: The eating part took 4 or 5 takes. Filming people scoffing is never that appealing..The cooking part was done in just 1 take though. Most of the time the cooking part is done in just one take, just as long as we are organised. The wok clock honestly helps me a lot with this!

Much like when I started teaching, filming was so nerve racking at the beginning. But after 6 years of teaching I could do it in my sleep, it feels that natural. I'm hoping to get that way with the cameras. Practice makes perfect I guess?

SOW: How do you practice/prepare for filming?

JP: I always ask for a good brief from the TV channels. So long as I know exactly what they want then I can work out how to present my piece. On a more practical side I'm terrible at scripted words! I much prefer to talk my own way in my own style. It's like songs and lyrics - I remember tunes of songs but can never remember the lyrics! Maybe that's why I love karaoke so much!

One thing I find most difficult is actually wearing the right clothes for tv! I know that sounds weird, but it's tricky. No stripes, no brands, and not many patterns... but then you have to look vaguely cool and respectable! Weirdly, that's what takes most time and thought-out planning!

SOW: Who would play you in a film about your life?

JP: Funny question... ERM.... The kids from Goonies? He must be about my age now... Or the kids from Indians Jones... Is he the same kid?

SOW: What chef alive or dead, real or fictional would you want to cook with?

JP: Keith Floyd... What fun... I watch a Saturday kitchen best bites last weekend and he was in a dim sum restaurant in Hong Kong... Drinking tea believe it or not! Ken Hom is obviously up there with Keith too. And I am honoured that I have already cooked with such a living legend.

SOW: Last meal on earth would be?

JP: Don't shoot me but definitely steak and chips. With watercress and beetroot salad... Cooked medium rare with some good mustard on the side... Don't get me wrong - I love Chinese food but for me it's my everyday go-to. By the time I have just one day left I would hope that my Chinese food belly is satisfied with what it has achieved!