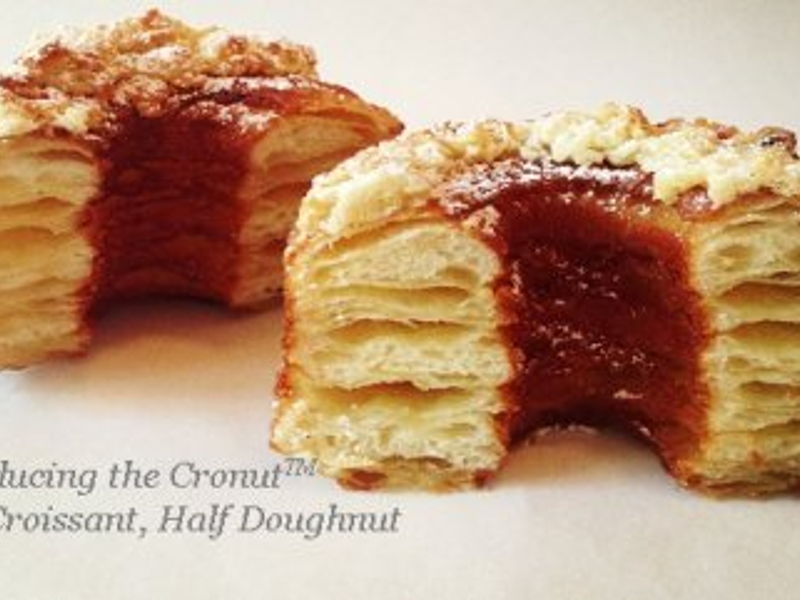 Are Cronuts Really Worth The Hype? And What's Next in The Hybrid Foods World?

Hybrids have taken the food world by storm recently and the surge in popularity and fanfare surrounding some of these creations has been a little flabbergasting to say the least.

What is a cronut?

If you don't yet know what a cronut is, you must have been living under a rock or something over the last few months. It's basically a croissant-doughnut mash-up: a ring of croissant-type dough, deep-fried in grapeseed oil, rolled in sugar, filled with cream and glazed.

Yes this sounds pretty tasty, and yes I'd probably buy a lifetime supply if I could; but is it really worth all the hype?

Where did cronuts originate?

They were first served in an upmarket New York bakery back in May by Frenchmen Dominique Ansel, who has since trademarked the name given their ridiculous worldwide fame. The cronut is proving just as popular as a royal baby (or even, dare I say, One Direction) with people queuing before the sun comes up just to get their hands on this calorific treat.

The bakery, which doesn't open until 8am, says on its website:

"As a rule of thumb, if you arrive prior to 6:45am on a week day, you have a great chance of getting a Cronut."

Not even the offer of a free cronut would get me out of bed at that time in the morning...sorry Dominique!

At $5 a pop, hundreds of people are found queuing outside the bakery every morning, and those who cannot be bothered to wait in line are said to be paying as much as $40 through special 'dealers' or 'cronut scalpers' (sounds a bit dodgy until you remember you're just buying pastries!).

Given the overwhelming popularity of the cronut in New York, everyone is now trying to recreate their own versions, with London's Duck & Waffle restaurant serving the 'dosant' (the name doesn't have the same ring to it does it?!) and patisserie chefs everywhere trying their best to tap in to this money-making creation. Even Dunkin' Donuts is now selling a cronut knock-off from some of their stocks in Asia.

Introducing the "Townie" & the "Duffin"

Others meanwhile are attempting to out-do Monsieur Ansel with their own hybrid foods, with London bakery and specialists of all things sweet, Bea's of Bloomsbury, coming up with the 'townie' (a cross between a tart and a brownie). In my opinion, while people are raving about this being the new trend and Britain's answer to the cronut, I'm not convinced – not once have I eaten a chocolate brownie and thought, "you know what, this would be better with an additional layer of pastry, because there just weren't enough calories in it for me!"

Bea's also make a 'duffin' (doughtnut-muffin) a baked muffin with a crispy crust, rolled in sugar and filled with jam – although it should be noted that I think this was created before the cronut craze began.

While it's hard to guess how much longer this hybrid-food fad will go on for, I thought it'd be a good opportunity to ask the question: "what next?" So the team at School of Wok have each come up with their own imaginative ideas that they believe could be the next big trend to swamp social-media networks and get overly-enthusiastic foodies salivating the world over.

Try to have an open mind with these ones guys....

Jeremy came up with 'supcakes' - supper in a cake (anything you can think of baked into a savoury cake) - although I'm not too sure how he would pull this one off. "Sausage & mash, bacon & eggs, cheese & biscuits, roast beef & Yorkshire pud...the options are endless," he said.

His other concept (with a questionable name) was the 'crapple', an apple filled with king crab salad – an idea that has kind of put me off my lunch if I'm being honest!

Attempting to bring a flavour of the East to the West (Country), Nev came up with the ingenious idea of 'cornrolls' (Cornish pasty spring rolls). Whether this means Cornish pasty fillings in a deep-fried roll, or spring roll fillings inside a Cornish pasty, I'm not too sure. Either way, his other name of 'sprasty' (spring roll pasties) makes sure that all bases are covered.

However, I'm not entirely sure that Nev's idea for meatballs served in a Vietnamese stock with noodles called 'phoballs' (pronounced fur-balls) is really that revolutionary...however I do like the name.

As for Adrienne (a mother who is already trying to think of clever ways to get her daughter to eat more fruit), she came up with the 'peanapple': a peanut butter & banana-filled apple.

While I'm not too sure any of these ideas are as ground-breaking as the 'cronut', they certainly got our creative juices flowing.

What do you guys think? Can you think of any better ideas for hybrid foods?

Let us know what you think about new "hybrid" foods and any revolutionary ideas- that are hopefully better than "crapple"!