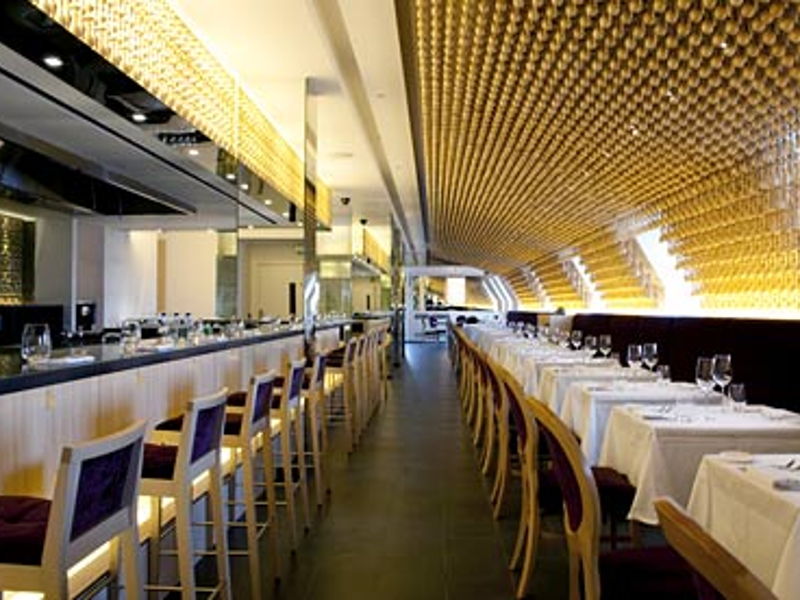 Eating out in London is always a bit like playing roulette with your tastebuds. Do you take a gamble and splash out for somewhere swanky where quality is everything, or do you suss out cheaper options in hope of striking the jackpot?

Such was the question facing us this week when we ventured into central west london for an evening meal. As our friend was only in town for a few days, we decided to leave the Pizza Express vouchers at home and instead booked a table at Aqua Nueva on Argyll Street. With a menu designed by former El Bulli chef Alberto Hernandez and a best newcomer accolade from London restaurant bible Square Meal, we thought we were betting on a sure thing...

Entering Aqua Nueva, there's no doubt that you feel every inch the rock star that the menu prices suggest. Plunged into darkness upon arrival, we staggered behind an expertly-coiffed lady with a clipboard who guided us into a lift and through some more darkness before we emerge (blinking) out onto a swish roof terrace with standing heaters and rooftop views of the city. So far, so glam.

Specialising in Spanish and Japanese food with two different dining areas for each cuisine, Aqua Nueva is actually two restaurants rolled into one, each with a different menu. Once we got too chilly for the terrace, we were ushered to our table amongst the quirky decor (the Guardian described the wooden objects hanging from the walls as resembling children's toys or outré sex aids, 'depending on your mindset'). We ordered what felt like a staggering amount of tapas. Croquetas de jamon iberico, plates of Spanish meats, filo pastries with artichokes, seafood selections of prawns and scallops and a variety of other such tasty sounding treats. Unfortunately, despite the high prices (most plates were about £9 with the seafood costing £16) the portions were tiny (four teeny croquetas rattling around on one plate!!) and the flavours just didn't cut the mustard. Everything was distinctly ok. The croquetas, nice. The meats, not bad.

We were then faced with a decision. Still hungry, we pondered whether to take a further risk and fork out for the big bucks main courses (we'd heard the braised oxtail was immense) or cut our losses and get out whilst we still had enough change in our pockets for a big fat Nando's.

It was a decision made all the more tricky by the fact that we'd consumed a greater deal more wine than food, but finally we asked our smouldering Spanish waiter for la addicion, paid up (eek) and bolted for the door.

I know what you're thinking. This is going to be a story of David beating Golliath. An evening of disappointing and overpriced food made good by the glory of a decently cooked chicken and a spicy tomato-based salsa. But little did we know that in fact Nandos too was in on the act. We had managed to find the only Nando's in London, nay the country, nay the WORLD where they had RUN OUT OF CHICKEN.

And there you have it - one more reason why you need to learn how to cook at home.