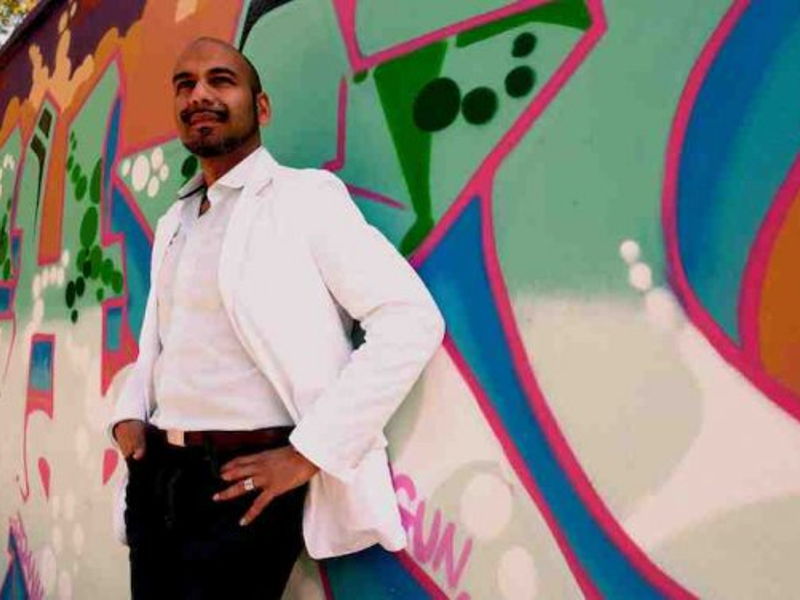 This week we have had the pleasure of sitting down with TV chef, author, and teacher Ivor Peters aka. The Urban Rajah to find out a bit more about his love affair with food, the story he tells through cooking, and what we can expect on his upcoming Spice Academy class with us, taking place Friday 27th March. Ivor's soulful approach to developing aromatic flavours coupled with his lively charasmatic personality is certain to make his debut class with us a one-of-a-kind experience to remember! Just listening to the description of the dishes he loves has our stomachs rumbling and our taste buds salivating!

And just between you and us, we smell a bromance developing between Ivor and Jeremy- two chefs whose love of food was clearly built into the roots of their family tree.

SOW: Other than hunger of course, what was it that drew you towards cooking and food in the first place? How did you arrive on becoming a chef?

IP: I'm drawn by the idea how food brings people together. It acts as the glue for conversations, parties, gossip, deals...it's a universal language. But what I absolutely love is the stories behind food, how the recipes came into being and the journey behind the food. I've been cooking for years and the transition from home cooking to being a chef was incremental rather than being a Damascene moment.

SOW: Travel seems to be very important to you. On your travels or from your experience what story does Indian food tell? Does this change based on the region it's from?

IP: Travel is the oxygen of inspiration. Travelling around India and tasting food from the various regions is like a history lesson in humanity, it speaks of Mongol incursions, Mughal invasions, Portuguese discoveries, British colonialism, French refinement, Dutch courage, the Jewish diaspora....tasting Indian food is like consuming the past. It's a cuisine that's taken thousands of years to evolve and it's still innovating. Regionally of course everyone has their own way of preparing their classics, from hearty meat based stews in the North to fiery chilli and coconut laced curries in the South.

SOW: What is your favourite family recipe and why? Who was it passed down from and how did it get to you?

Ah now that's likely to get me in trouble, favouring one family member over another....are you trying to get me cut out of the family will?!! I am however, really drawn to a recipe inspired by my Uncle Lawrie at the moment - it's a delicate Salmon masala and he's a 'dab' hand at preparing fish (excuse the pun) and it's a dish I've decided to teach at the Spice Academy Masterclass

SOW: What is your best piece of advice for a novice who wants to make an authentic curry at home?

Grind your own garam masala...it's easier than breathing and it'll make an aromatic world of difference. It's a wonderful blend of whole spices, toasted and then blitzed into a wonderfully fine powder and if stored airtight will keep for a few months. I typically add; black and green cardamom, cloves, peppercorns, cinnamon, cumin and fennel seeds to my own garam masala mix.

SOW: What's your middle of the week go-to family dish?

Normally by Wednesday I'm aching for something simple, nutritious and quick to eat, so I'll always have some mixed dal pre-prepared and scoff it with hot chapattis, and I'll usually pair it with some veg that's hanging about like a quick-fire carrot curry partnered with black onion seeds, fresh ginger and garlic and a touch of chilli. I save the heavier more opulent dishes for weekend entertaining!

I'm using a lot of chaat masala at the moment, it's a blend of spices which also uses black salt...it's pungent but it's got secret powers and manages to transform chips, salads, vegetables and dips into amazing taste sensations. The herb I couldn't live without is coriander...it's the most versatile herb on the planet and it's so good for you. Did you know it lowers blood pressure?!

Chef you want to cook with, dead or alive, real or fictional?

Hmm hard one, it'd have to be a 10 course tasting meal as it'd stretch out my time on the planet. It'd definitely include steaming hot chapattis, my mother's meatball and egg curry (may sound weird but it's knockout), my father's Prawn Tang, my Uncle Lawrie's fish biryani, Uncle Stan's Kismet Korma and Uncle Abu's Aloo Ghobi...if my family couldn't be with me physically they'd be present in the food. Oh and I couldn't leave God's green earth without a second helping of pistachio kulfi ice-cream.