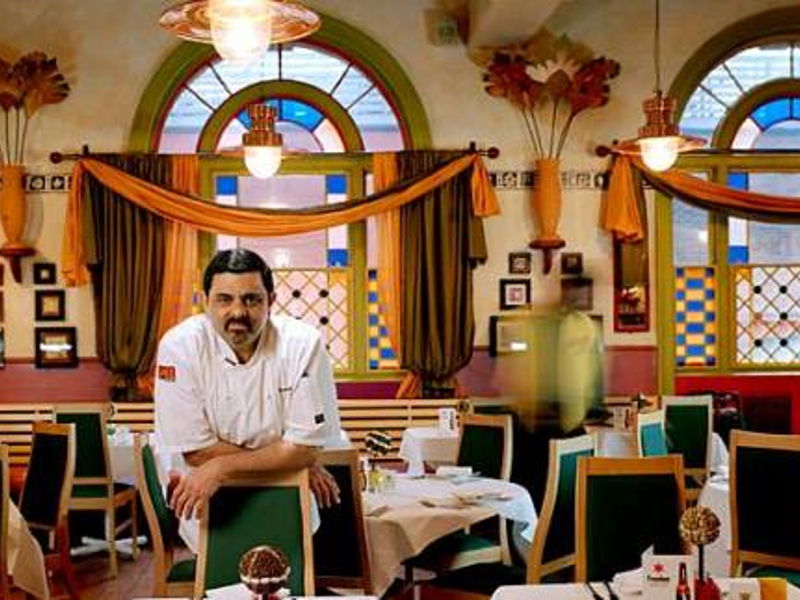 The other week I popped along to Café Spice Namaste in E1 to watch one of the Incredible Spice Men, Cyrus Todiwala, demonstrate the versatility and diversity of turkey. With Christmas just a matter of weeks away (less than 8 weeks, folks!) it’s already time to start thinking about Christmas parties, gifts, and most importantly, food! While it is traditional to have turkey primarily at Christmas and overlook it the rest of the year, it is a meat that is healthy, versatile, relatively cheap, and can be spiced up to eat during any season. Chef Todiwala engaged with us with his easy banter, quite often diverging from his point to answer questions. He left us with a wealth of facts and interesting anecdotes to ponder as we watched him cook and ate his delicious dishes. For instance turkeys apparently originated in Mexico! Who knew?! Also, turkeys lay their eggs only in the summer months, requiring thirty times as much food for only a third the amount of eggs that chickens provide. This is probably why we don’t see or hear much about them comparatively.

Chef Todiwala also revealed some interesting insights into Indian cuisine, as well as general cooking during his demonstration on turkey. A point, useful when applied to any type of cuisine, was that the key difference between a spice and a condiment is that spices are dry (cloves, cinnamon, star anise etc.) and condiments are wet (garlic, fresh coriander, ginger). A spice will absorb your cooking oil, then release the flavour of the spice into your dish - essential to note when attempting to master Indian cuisine. And the mysterious ‘masala’ that most of us associate with the sauce to accompany chicken tikka, is in fact a mixture of any two or more ingredients, so a garlic and ginger paste is a simple masala!

We sampled some delicious Indian recipes all made with turkey and Indian spices and flavouring. School of Wok is always interested in how to twist the traditional. So this Christmas season, why not try something new? Follow us on Facebook, twitter and Instagram and forward us your beautiful creations!