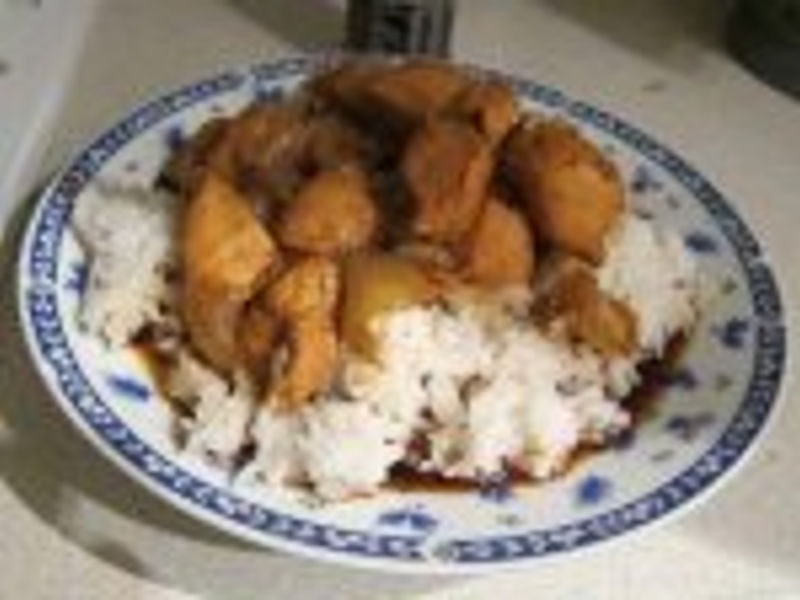 Last night I went on my first recipe adventure.

Ok, so I was cooking Jez's Soy Sauce Chicken, and not fried locust or freshwater crocodile, but nevertheless the anticipation in my kitchen was palpable. I love, love, love Chinese food and was very excited to see that you can apparently whip up an authentic meal in about 40 minutes, using limited ingredients and basic cooking techniques.

Well, that was the theory.

It all gets off on the wrong foot when I check the ingredients list and swiftly realise I don't have any coriander. Bah, it's just for decoration right? To be honest I'm just glad I remembered to buy the chicken (not sure if Chicken in Soy Sauce would have been quite as good without it).

First of all, I hack into an onion, following Jez's instructions to cut it in half and then quarters again. Then I mix 10 tbsp of dark soy sauce with 4 tbsp of sugar in a 'prep bowl' (aka a random measuring jug). I heat the onions in oil, before adding the chicken (I cheat and use pre-cut breast pieces instead of thighs). Once the meat is beginning to brown, I add the sugary sauce and bring to the boil. My recipe dutifully tells me to wait until the sauce 'wraps' around chicken. I start to get a bit anxious (what does this mean!!) but decide this must be when the sauce starts to get a bit ‘clingy' with the chicken. I add enough water to cover the chicken, lower the heat and pop on a lid.

It's at this point I realise I don't have a lid.

Ever resourceful, I turn the wok upside down and plonk it over the saucepan, leaving the concoction to simmer.

Feeling fairly in control at this stage, I follow Jez's instructions about the rice. I give it a good clean in cold, water, but am confused at being told to cook it in cold water, too. It's coming up to 9 o'clock and I'm starving, which influences my decision to boil the kettle and use boiling water (shh!!).

It seems my decision to disregard Jez's words of advice causes bad karma, however, when all of a sudden I'm hearing little explosive POW sounds coming from the upside-down wok contraption. Fearing myself under attack, I'm fairly relieved to find it's just condensation dripping off the 'lid'.

(Later on I will curse my relief, as I realise this exploding condensation trick leaves grimy kitchen surfaces that even Mr Muscle would be wary of...)

I wonder out loud if I have enough rice. I've used 1.5 cups, as per recipe. The boyfriend, however, who previously enjoyed musing on whether ‘tablespoon' should actually be ‘dessert spoon', has moved his philosophising onto ‘Just what kind of cup is a ‘cup' these days anyway?'

To avoid further questioning, I chuck in some more rice. Then I get really creative on the lid front, this time opting for a bowl.

With everything bubbling merrily away, I get on with some washing up, fairly pleased at my ability to multi-task and generally be a very good, wholesome, domesticated type person.

There is an awful lot of washing up, I think, after some time. I find myself listening to the pow, pow, pows of the wok/lid for entertainment.

Argh! Suddenly a suspicious burning aroma fills my nostrils. The rice is demanding more attention, clearly jealous of me spending so much time with the dirty pans.

I lift the lid and a sorry little pile of shrivelled grains looks up at me. Desperate to heal our rift, I pour on a little more boiling water, aware that Jez would probably be frowning at me disapprovingly.

I wait a few more minutes, hovering anxiously by the hobs. And then the wait is over and it's finally plating up time.

My rice is, unbelievably, light and fluffy (although definitely in unnecessarily copious amounts). The chicken is sweet, tender and flavoursome. My sauce is probably a little bit runny (I think I got a bit too generous on the water front), but all in all, it's a yummy, mid-week meal.

I gulp down my portion and wonder... what will Jez and Nev send me next?!