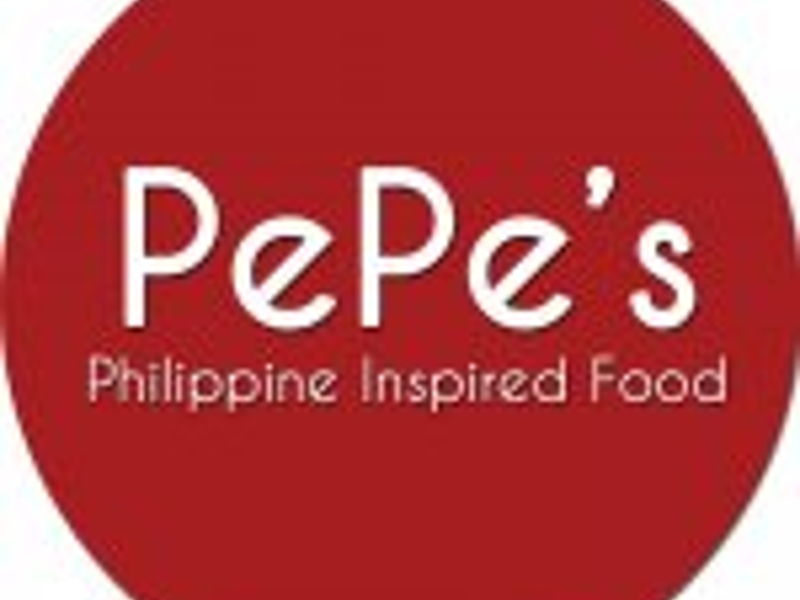 Mae Magnaye Williams, a self-taught chef in her own right founded Pepe's. She was born in the Philippines and came to the UK in 1999 as a teenager with her younger sister to join her mother. "I have always cooked," she says. Pepe is her father's nickname and he is the inspiration for Mae's passion for cooking. Growing up with her father, she learnt to prepare and cook traditional home-cooked meals. From a young age, every time her father cooked, he always asked Mae to help him prepare the ingredients and watch him cook the dishes. Mae loved this and enjoyed the food much more! Mae also enjoyed the street food in the Philippines; it's popular to many Filipinos as they have 'merienda' (snacks) in between meals.

In 2008, Mae experienced a life-changing moment when she was asked to cook on UKTV Food's 'New British Kitchen' programme highlighting the different flavours that make up modern Britain. "I co-founded a charitable organisation named 'Philippine Generations' in 2007 after the birth of my first child. We were approached by a production company looking to showcase Philippine Cuisine with Hardeep Singh Kholi [Broadcaster and TV Personality] and John Torode [of Smiths of Smithfield and Master Chef fame]. I appeared on national TV taking Hardeep around London in search of Philippine Food, cooking for him and cooking two traditional dishes; 'Sinigang' and 'Lumpia Rolls' [Filipino spring rolls] in their studio." This was the moment Mae realised what her calling was.

As part of her role in the charity, Mae produced a regular 'Recipes' blog, something that grew to be very popular. "I cook at home and when I've cooked a meal, I tend to take a picture of it and put the recipe up online or at least put the picture on Facebook." This led to Mae being asked to cook for people and has cooked several times for special events at the Philippine embassy in London. "I try my best to make Filipino cuisine appetizing to Western tastes. Philippine Cuisine is simple, modern but full of flavours. Presentation is very important in the West but the taste is more important back home, getting the balance right is Key!"

In January 2011 Mae's father Jose 'Pepe' Papio Magnaye died of Cancer in the Philippines. "It affected me a lot. My father was one person I look up to and I wanted to do something to celebrate who he was and 'Pepe's' is his Legacy."

'Pepe' was not the only influence in Mae's life, "My father was from Batangas [Southern part of Luzon Island in the Philippines], but my mother is from Leyte [Central Visayan group of Islands in the Philippines], so I grew up with two big culinary influences in my life. In fact another big, big factor in my cooking is my mother in law. Many of the Filipino caterers and restaurants in London use some of her original recipes and she was involved in some of the very first community groups and restaurants. She comes from Pangasinan [Northern part of Luzon Island in the Philippines] and this area is very different to where I grew up. Different areas of the Philippines cook their food and use different ingredients to other areas. This is very noticeable in the different way the same dishes are prepared across the country."

It was in Spring 2011 that Pepe's Kitchen really took form. "I produced Philippine Canapés at a few events in 2011 and this ranged from a Pate on a cracker using a traditional Philippine dish to another served in a puff pastry!"

It is these subtle combinations of East and West that sets Pepe's Kitchen and Mae's food apart.

As part of the Pepe's Kitchen experience, Mae offers Philippine Cookery Classes to compliment her Catering Services. Teaming up with School of Wok is integral to the promotion of Philippine Cuisine. "I'm so excited about teaching how to cook Philippine food and for everyone to taste our food. I was looking for a good location kitchen that I can hire for a good year (on and off) and I finally found School of Wok in Covent Garden. Recently opened this year too! It seem like it was meant to be." School of Wok is the flagship cookery school of Head Chef Jeremy Pang for the art of Oriental and Asian cuisine.

There are three initial classes in 2012, all offering the opportunity to learn how to make 4 dishes in each class. There are authentic 'Philippine Street Food' dishes, as you would enjoy from traditional street vendors, 'Festive Foodie Gifts' to give to your friends this holiday season and 'Noche Buena' a selection of dishes you would expect to find at a Philippine Christmas Dinner served after Midnight Mass!

The beauty of Philippine Cuisine is that it is distinct to all other Oriental and Asian Cuisine, yet familiar enough for all to have an opinion. Hundreds of years of trading amongst the many thousands of islands in the Philippines and China, India, Malaysia, Indonesia and various Polynesian islands added to Spain's near 400 year Colonial rule and 50 years of American rule and you have a myriad of dishes with hints of both East and West.