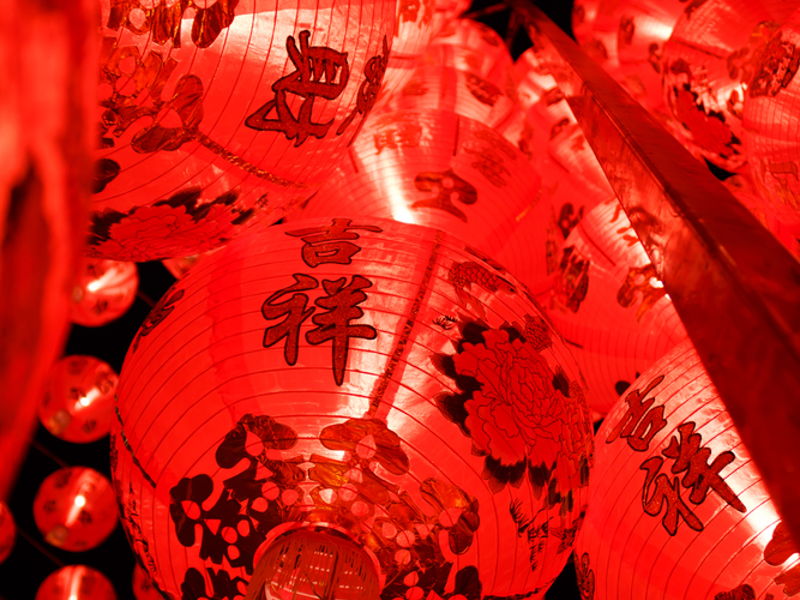 The Chinese New Year starts on a different day ever year - instead of following the Gregorian calendar that we're used to, it follows the Lunar Calendar. Festivities kick off on the first day of the lunar month, when the moon is at its darkest, and last for 15 days.

To ensure the best year possible, the Chinese will follow many special traditions that are believed to bring good luck. Before celebrations start they will spring clean their houses to sweep away all traces of bad luck. Then once New Year's Eve arrives, all brooms, dustpans and brushes will be hidden away so the good luck is not swept away. The house will then be decorated with paper scrolls emblazoned with phrases like ‘happiness' and ‘wealth'.

Families will gather together for a big New Year's Eve meal. Auspicious foods are an important focus during the two-week festival. Thus a chicken might be served whole, to symbolise family togetherness, and Sticky Rice Cake might be offered up to ensure a rich, sweet year ahead. Here a few examples of lucky foods:

Spring rolls With a shape similar to gold bars, these are said to symbolise wealth.

Long Noodles An old superstition says it's bad luck to cut these up, as their length represents a long life.

Whole Fish Served with the head and tail attached to symbolise a good beginning and ending for the coming year. The Chinese word for fish also sounds like ‘abundance'.

Jiaozi Dumplings filled with pork and cabbage, boiled and served with soy sauce and vinegar. With a shape similar to the gold ingots that were used as currency in ancient China, these tasty treats are said to bestow wealth.

So if you're lucky enough to be invited to a Chinese New Year meal next week, what should you wear? Red, red, and a whole lot more red. The bright colour represents fire, which is thought to ward off evil spirits. It also represents wealth, and many Chinese children will wake up on New Year's Day to find a red envelope filled with money and sweets under their pillows.

On the last day of the two-week celebrations, lanterns are hung from the windows and carried by the light of the moon. This is the time when you're most likely to see the famous Dragon Dance, with young men dancing under the paper, silk and bamboo structure and collecting money from the crowds.

This year we should have even more to be thankful for than usual. Whilst last year was the ferocious Year of the Tiger, a tumultuous one to say the least, the Year of the Rabbit is characterised by a more easy-going, placid pace, which should give us time to reflect upon the craziness of 2010 and relax about the future. Which sounds good to us!